Blog
You are here: Home / Blog / Blog / There’s No Fun In Fungus: How to Get Rid of Toenail Fungus 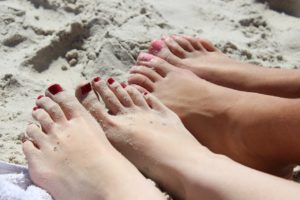 With summer in full swing, you likely either already have your beach body ready or you are dedicated to keeping your not-so beach body covered up for the rest of the season. However, as a part of your body that you shouldn’t have to cover up during the summer, your toenails can attract toenail fungus that causes them to not only look unsightly but to feel uncomfortable as well. If you think you have toenail fungus but aren’t quite sure, read on to learn more.

What is toenail fungus?
Toenail fungus is caused by an infection that gets into the cracks in your toenails or the area around the toenail itself. Because your feet tend to attract both heat and sweat, they are considered to be a breeding ground for fungus— specifically your toenails. Athletes in particular are more prone to getting toenail fungus because they spend a lot of time sweating in their shoes and put a lot of strain on their feet.

What are the symptoms of toenail fungus?
When you first get toenail fungus it might not be visibly apparent but you may notice that your toenails and toenail beds are a bit more sensitive than usual. However, after some time, your toenails will change colors, get thicker, and may even start to peel off.

How is toenail fungus removed or treated?
From antibiotics to over-the-counter medication and ointments, there are a variety of treatments that claim to fix toenail fungus. However, as the most effective method on the market and the one that we use at Fix Laser & Skin Center is called the GentleMax Pro Laser System. During this treatment process, laser energy is used to directly heat up the targeted area on the toenails. After about three to six months after the procedure, the toenail will begin to grow back and within a year, the toenail will fully grow back.

If you have toenail fungus, get to the root of the problem right away and contact Fix Laser & Skin Center to learn more about the GentleMax Pro Laser System.

Scared of a Facelift? Consider Freezing Your Chin Fat With CoolSculpting

Things to Avoid When You Have Toenail Fungus
Scroll to top